Online purchases closed. Registration and purchases can now be made on event day.

A Walk in the Park Geelong is held in the picturesque Eastern Park starting at our Event Site, just near the entrance of the Geelong Botanic Gardens and the Geelong Play Space.

There will a coffee van onsite so you can purchase your caffeine hit to get your around the 2km course.

Dogs are welcome on the Walk and at the Event Site, but we do ask that you bring your own bags to pick up dog poo, and that your dog is on a short lead at all times.

Starting at the Event Site, just near the BBQ Pavilion in Eastern Park (100 metres from the entrance of the Geelong Botanic Gardens), the 2km walk circuits Eastern Park.  You’ll get picturesque views of Corio Bay as well as walk below Eastern Park’s famous Flying Fox community.

The course is mobility friendly and suitable for wheelchairs and prams.  There are a few inclines and declines on the gravel course and will take around 45 minutes to complete.

There are lots of parking within Eastern Park around the Eastern Park Circuit.  Parking is available above Hearne Parade and near the entrance to Eastern Park from Malop Street.

In the unlikely event of an emergency situation – there are three Emergency Assembly Areas around the Walk.  Volunteer Track Scouts will direct you to these Areas if it is required.  The Areas are in the car park above Hearne Parade; the car park of the East Geelong Golf Club; and in the car park at the southern end of the Circuit, near the ovals.  If you are directed to these Areas, please listen to the volunteers, and emergency service personnel. 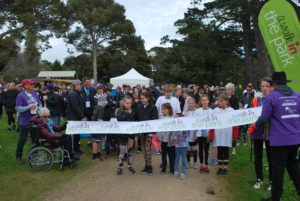